Friday Films: ‘Diary of a Country Prosecutor,’ Based on a Novel by Tawfiq al-Hakim

Every Friday, ArabLit suggests a new classic film-book combination, until we run out of steam about 20 weeks in: 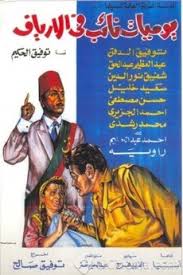 Mada Masr critic Adham Youssef has called filmmaker Tawfiq Saleh a “militant with a camera.” The 1968 film version of the great Tawfiq al-Hakim’s Diary of a Country Prosecutor (1937), translated into English by Abba Eban, was one of several book-to-film projects Saleh took on. According to Youssef:

A member of Al-Harafish (the Rabble), a group of intellectuals and artists that named itself after a novella by Naguib Mahfouz, Saleh based most of his films on texts by heavyweight writers that he knew. He transformed the literary discourse of the time into a cinematic one.

While the book is a black comedy, based on al-Hakim’s own time as a country prosecutor, “the film’s overwhelming philosophical and political tension make it more of a thriller,” Youssef writes. “It tackles police corruption and a selfish leadership, and concludes with the prosecutor writing in his diary: ‘the ink that we write our reports with is obviously more expensive than blood. This is because “justice” and “people” are words still unknown to people in this country.'”

Cinema Arabiata notes that one particularly macabre scene is omitted, “since it likely could not have been filmable in Egypt at the time, one involving crime scene brain extraction and a frivolous, grotesque shared search for a deadly bullet.”

You can watch it online:

Adrift on the Nile, based on a novel by Naguib Mahfouz

A Nightingale’s Prayer, based on a novel by Taha Hussein.

Kit Kat, based on the novel The Heron by Ibrahim Aslan, available in translation by Elliott Colla.

The Egyptian Citizen, based on Yusuf al-Qa’id’s award-winning novel War in the Land of Egypt

7 thoughts on “Friday Films: ‘Diary of a Country Prosecutor,’ Based on a Novel by Tawfiq al-Hakim”