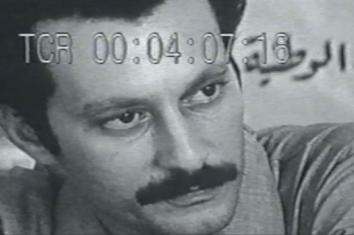 According to Hajaj, the interview, excerpted below, was filmed in Beirut, and “has only been recently uncovered by my dear friend James Carleton.”

Kanafani would have turned eighty this year, had he not been killed at the age of thirty-six. As I wrote on the anniversary of Kanafani’s birth:

Although it’s been more than 40 years since the author was killed by a car bomb, Kanafani’s body of work remains vividly relevant: Men in the Sun is about refugees trying to smuggle themselves into a place where they might find work; Return to Haifa is about family and loss, and was a touchstone for Susan Abulhawa’s popular 2010 novel Mornings in Jenin.

Much of Kanafani’s work remains in print; it circulates online; it’s watched in film adaptation, as with  The Dupes; and it continues to be adapted to the stage. There have been several stagings this year; next month, Palestine’s Freedom Theatre brings “Images from the life of Ghassan Kanafani” to a month of shows in Portugal.

Kanafani also apparently remains a threat, as a Canadian teacher was suspended last week, apparently for giving a speech in which she called the assassinated Palestinian writer a martyr. Although there is a large gap in how the word “martyr” is understood across languages and cultures, and no one was ever brought to trial for Kanafani’s assassination, it’s widely believed that Kanafani was killed for his beliefs.

This interview has already been widely shared online, as Kanafani’s afterlife continues:

“Letter from Gaza” by Ghassan Kanafani. And a reaction to the piece: “When words fail, read literature.”

The estate’s official website; you can find a bit more of his translated work here.