Today is publication day for Youssef Fadel’s A Shimmering Red Fish Swims with Me, in Alex Elinson’s translation: 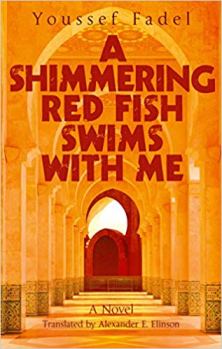 This completes Fadel’s trilogy of Hassan II-era historical novels in English translation: A Beautiful White Cat Walks with Me (tr. Elinson), set around palace politics in 1980s Morocco; A Rare Blue Bird Flies with Me (tr. Jonathan Smolin), set around a woman in 1990, who is searching for her husband who’s held in the infamous Tazmamart Prison; and now Shimmering Red Fish, set in late-’80s and early ’90s Casablanca, in the shadow of the construction of the giant Hassan II mosque.

You can read an extract of Shimmering Red Fish on the Hoopoe website.

To mark publication day, Youssef Fadel sent five of his favorite reads: one from Jordan and four from Morocco; two available in translation and three not yet translated to English.

Three Faces of Baghdad (1982), by Jordanian writer Ghalib Halasa. This writer lived as a stranger in all the countries through which he passed. Writing about wandering and loss — in a world that resembles a masquerade party.

Looking at the Beloved Face (1983), a collection of stories by Moroccan writer Ahmed Bouzfour. Modern writing and a new approach to dealing with the short story.

Like a Summer Never to be Repeated (1999). Here, Mohamed Berrada writes about his days in Cairo. The candor of the writing makes you believe that this is an experience worth telling.

An Attempt to Live (1985) is a novel by Mohamed Zafzaf about the sufferings of daily life; it’s writing you might call deceptively simple.

For Bread Alone (1972), by Mohamed Choukri. About sex and loss. It’s written about the volcano that we sit atop and do not see.