The author of the acclaimed Algerian graphic novel Fatma n’Parapli, Safia Ouarezki, talks about the people behind the characters in her striking debut: 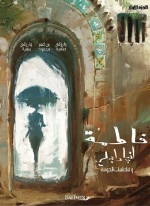 Fatma n’Parapli (Fatma of the umbrella) is a comix written in Algerian Derja by Safia Ouarezki. It was a family project: inked by Soumeya Ouarezki, Safia’s sister, and drawn by the graphic artist Mahmoud Benameur, Soumeya’s husband. Fatma n’Parapli was published in 2014 by Dalimen Editions, a publishing house that specialises in graphic novels and comix in Algeria, and released in French translation in May 2019 by Alifbata editions as Fatma au Parapluie, translated from the Algerian by Lotfi Nia.

This was the same publishing house about to release Abdelaziz Mouride’s graphic-novel adaptation of Mohamed Choukri’s For Bread Alone.

Fatma n’Paraplui tells the story of “Fatma of the many umbrellas” and of Lallahoum, two women who live in a neighborhood on the heights of Algiers called Flissa. Fatma and Lallahoum are an integral part of Flissa, but they are perceived by the other inhabitants as unusual, with strange and disturbing ways. Fatma is a collector of umbrellas, no matter their condition, and Lallahoum repairs shoes and umbrellas by day. But by night, she is said to practice sorcery. Despite their gossip, the neighbors come to both women whenever they need help or comfort, and children of course find them fascinating.

Safia Ouarezki kindly answered a few questions about the comix, its themes, and how it came to be born.

Nadia Ghanem: When, and how did the idea of writing a comic book came about?

Safia Ouarezki: Mahmoud has always been a massive fan of comics and graphic novels. A few years ago, the FIBDA (Festival International de la Bande Dessinee d’Alger) — with the help of the Ministry of Culture — began running comic-book workshops, conducted by published foreign comic-book artists. Soumeya and Mahmoud attended the first one, and I joined them for the next two. We began by working together on short stories that were published in anthologies. Fatma N’Parapli then appeared in 2014.

NG: The story centers around the inhabitants of an area in the Casbah, and how this group perceives two women: Fatma and Lallahoum – does the Casbah hold a special place in your heart?

SO: Actually we specified ‘les hauteurs d’Alger’ [Algiers’ heights] because it isn’t strictly set in the Casbah. We were inspired by the area where my parents grew up, and the people they knew and lived with. It’s a small neighbourhood in El Biar nicknamed Flissa, after the village of Iflissen where most of its inhabitants came from. I think you can tell by the names of the characters and their dress that they are of Kabyle origin, and they spoke the language, too, but we wrote in Arabic because (gasp) we don’t speak Kabyle!

NG: Have you ever met similar characters to Fatma and Lallahoum? Where did you get your inspiration for them?

SO: As mentioned above, most of the characters in the novel are inspired by real-life women, including both Lallahoum and FP. Lallahoum is the name of an old woman Mahmoud had heard of. We were mostly struck by the name, and we wanted a ‘witch’ of some sort in the story, because superstition prevailed back in those days and so many of my mother and grandmother’s anecdotes revolved around supernatural occurrences. FP is based on a woman called Yamina El Hocine who lived in Flissa and who was, I suppose, schizophrenic. I can’t say for sure because back then people weren’t aware of the range of mental illnesses out there, they just called them all “illnesses.” In addition to being “mad,” she was also very clever, and could compose rhyming poetry off the top of her head. She was also a tragic figure in that her mental illness set in after the death of many members of her family during the war, and she was forced to raise her four children on her own.

NG: There is no use of colour in the Fatma n’Paraplui, all the illustrations are in black and white. Why this choice?

SO: I think Mahmoud is better suited to answer this question. We experimented with different styles before settling on the final one, which we felt complimented the dark themes dealt with in the book, and highlighted the atmosphere of obscurity and secrecy.

NG: Throughout the book, the perspective changes depending on which character sees whom. For example when children watch grownups, they see them as tall and enormous; when people watch from a balcony, what they see is minute or angled. All this distorts what we perceive as a “normal” shape. I really enjoyed this subtle statement which, to me, underlines that we understand others from our own perspective. Was this play with frames something that you especially wanted for the purpose of telling the story, or is it Mahmoud Benameur’s characteristic technique?

SP: All Mahmoud! He loves to draw people from crazy angles, mostly for aesthetic appeal but also for the purpose you mentioned above.

NG: The drawings’ style, and the way the story is told, is similar to scary or Halloween stories. Was this your intention initially, or did this “spooky sensation” develop as the drawings and the text were put together?

SO: My sister and I wanted to deal with “madness” and “perversity” in its different forms. My mother and gran’s stories revolved around so much cruelty and harshness, which were regarded as mundane in that time and place, but which for us were shocking. This included mental illness, domestic violence, war, oppression of women and children, poverty, negligence, the list goes on. We didn’t need to write a spooky story, the story was spooky from the start. However, we noticed that our older relatives always told these tales with a touch of humor and dare I say nostalgia (!!), so we tried to do justice to that.

NG: What can you tell us about Fatma? Why is she so interested in umbrellas?

SO: I have already introduced you to the original Fatma N’Parapli, Yamina (Allah Yerham’ha). Obviously we brought our own touch, otherwise it wouldn’t be fiction. This includes the umbrellas, which have a story of their own. Yamina once left her house stark naked during a psychotic break, carrying nothing with her but an umbrella to shield her from the weather. We decided to add body to this anecdote by attaching some significance to this choice, and making umbrellas her fetish. If we were to make a following volume, we would shed light on the relationship between Fatma and Lallahoum, as well as on Fatma’s troubled past.

Dr. Nadia Ghanem is ArabLit’s Algeria and Morocco Editor. She is a British Academy Postdoctoral Fellow attached to the School of Oriental and African Studies, London, where she works on a project translating divination texts from ancient Iraq, written in the Akkadian language. She also blogs at tellemchaho.blogspot.co.uk about Algerian literature.