How can we read Cairo’s buildings and streets? Two new books try ways of mapping the city:

Cairo’s urban history is not an undocumented spectacle, least of all by the American University of Cairo (AUC) Press, which famously “mines Egypt” for the content it produces. There are the coffee table photograph books I might buy as décor and chunky guide books that look like they belong in the backpack of a hitchhiker but, at closer inspection, are introductions to the specifically Egyptological elements of the country. AUC Press also famously aims books both at academics and at a larger public, taking advantage of its flagship store in Tahrir Square in downtown Cairo and how easy it is for tourists — who are starting to return to Egypt after a decline in the last ten years — to stumble across it.

AUC Press also sells its books in other places that stock English-language books across the city, such as Diwan Bookshops, and the books are not strangers to the shelves of my friends and acquaintances. AUC Press not only mines Egypt, but it feeds at least some of its intellectual curiosity.

AUC Press’ latest additions to its urban history lineup look like siblings, or perhaps cousins. 2018’s A Field Guide to the Street Names of Central Cairo, by long-time Cairo residents and seasoned researchers Lesley Lababidi and Humphrey Davies, is slim but jam-packed with information. The exterior could lead one to believe it is a novel, with colonial-era maps of what is now downtown Cairo serving as the cover. But you flip it open and it looks like a geographical dictionary of the Arabic-language tradition, something I use when I’m trying to figure out a reference in another text, maybe philosophy or Islamic law.

Like the geographical dictionaries of the Arabic-language tradition, Street Names is dense, well-researched, and comprehensive. But I can fit it in my jacket pocket, and, if I were to walk it around the city, I could pull it out when trying to figure out why, for instance, Garden City is shaped the way it is. The book is designed so that a reader can pull up any street in that neighborhood and get a glimpse of why that neighborhood and others in Central Cairo are shaped as they are. Naming practices themselves offer a window into nineteenth- and twentieth-century Egypt — the natural focus of this book, as it is concerned with Central Cairo — and who or what was deemed worth honoring in street-name form. It is not simply a guide to the street names of central Cairo, but really a quirky yet traditional guide to Cairo.

If the slimness of the volume lends itself to long strolls around Cairo, I’m not sure what to tell you about its sibling, 2020’s Cairo Since 1900: An Architectural Guide. Like Street Names, Cairo Since 1900 is concerned with neighborhoods. I could easily pick it up and get a sense of how different neighborhoods coalesce around themes. But Cairo Since 1900, written by the urban historian and curator Mohamed ElShahed, is also a guide to architectural styles and how neighborhoods aren’t just created around a single theme but are rather mishmashes of architectural styles. Shahed’s innovation is also that he focuses on everything, not simply the European influence on Cairene architecture: here lies the neo-Mamluk, the neo-Fatimid, alongside the brutalist. Also dictionaryesque, it goes building by building through each neighborhood, giving the reader insight into how buildings were originally designed, and how different buildings might have changed with time. 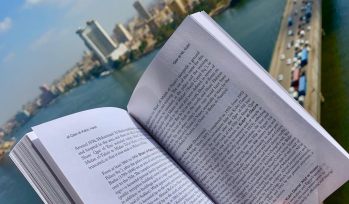 But I don’t know if I can stuff Cairo Since 1900 into my pocket. Actually, I know I can’t. It’s several hundred pages and has a nice stiff cover. So I know the text will survive my backpack as Street Names surely will, but maybe not falls when I trip on cracks in the sidewalk. The pages of Cairo Since 1900 are sewn into the book, meaning it’s also more likely to survive a page accidentally getting ripped out, which might be the greater risk. Street Names is protected by its slimmer frame. Cairo Since 1900 has more pictures than the maps in Street Names, but, fear not, it has those maps, too.

Pictures are necessary in a book like Cairo Since 1900 in a way that they are not in Street Names: I can match the names of streets to what I see in front of me or to GoogleMaps. So I need the pictures of, say, the al-Halabi Print House. But I don’t quite trust my eyes to read a description of a villa and not mistake it for a ministry, like the Awqaf downtown (although there are few villas downtown so I might be safe there); in the cases where Cairo Since 1900 documents buildings that have been lost, I also need the pictures, to imagine where things once were.  Teeth might fall out of the mouth that is this city, Cairo, and new ones will grow in. I just want to see where the teeth were and how they were replaced.

This question of documentation is one that comes back again and again in conversations I’ve had of late with cultural heritage specialists: that perhaps preservation is the wrong way to see things and that our task is to document what is happening to us as it happens, to be historians of our contemporary world. I once asked Lesley Lababidi and Humphrey Davies why they didn’t include the neighborhood Bulaq in Street Names, lamenting the fact that so much is now gone; had they taken the street names of Bulaq down, they would have survived in the book, even if they don’t today in Cairo. Lababidi and Davies told me that it was outside of the scope of the project, which was to document Ismaelia, or rather, Central Cairo. But I was being flippant when I asked the question, not seeing — not only problems of scope — but also how difficult it would have been to document something at the moment it slipped away, and not recognizing what Davies and Lababidi have done to preserve Cairo’s urban shifts over the last two centuries, and what their careers at large have done for cultural heritage.

I will come to look at Cairo Since 1900 the same way — I already think of Shahed that way — because it not only documents the past but also the future, including the plans for what will happen to Bulaq’s Maspero Triangle; “Cities eat themselves alive,” to quote Shahed. Perhaps what we need to preserve the city aren’t renovations of buildings deemed historic, but books we can carry with us through the city and through other cities, to remind us of where Cairo is and where it is heading. This is what we need; not another academic monograph, but rather something that takes the subject — in both cases, Cairo — and the reader seriously. The authors of both books have expressed interest in having their books translated as well, pushing back against our academic reality: that much of what is written about Egypt is inaccessible to Egyptians. That way, at least, if Cairo is to be preserved in the pages of a book, its preserved form can be consumed by Cairenes who read in both Arabic and English.

N.A. Mansour is a historian and a PhD candidate at Princeton University’s Department of Near Eastern Studies, where she is writing a dissertation on the transition between manuscript and print in Arabic-contexts.  She also produces podcasts for the Middle East Studies Channel on the New Books Network and co-edits Hazine.info, an archives blog.