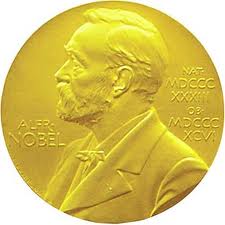 I saw this bit of speculation (Khoury and Oz) not in a major newspaper or magazine, where “Nobel 2010” handicapping hasn’t yet begun, but on World Literature Forum, from reader peter_d. Perhaps peter_d isn’t in the know, but it got me thinking about the 2010 Nobel Prize for Literature, which should be announced in October.

While there is often a good deal of talk about nominees (Philip Roth? Haruki Murakami? Kant Ibragimov?), the Nobel committee says this about the matter on their website:

The Nobel Committees in Physics, Chemistry, Physiology or Medicine, Literature and the Prize Committee for Economic Sciences each usually receives 250-300 names every year, but this [237] is the highest number of nominations for the Nobel Peace Prize ever. The names of the nominees cannot be revealed until 50 years later. [Italics mine]

I have not yet seen Elias Khoury mentioned as a contender, although the Independent called him “the kind of writer who wins the Nobel Prize for literature to sneers from the English-speaking world.” (Hunh?) Israel novelist Amoz Oz, on the other hand, has been named a front-runner for several years running.

Other Arabs in the mix: Syrian poet Adonis has been a nominee since at least the late ’80s. In his memoirs, pioneer Arabic-English translator Denys Johnson-Davies writes about a chat he had with a member of the Nobel committee in the late 1980s. Johnson-Davies and the (unnamed) committee member discussed four possible Arab candidates: Yusuf Idris, Tayeb Salih, Naguib Mahfouz, and Adonis. (All except Adonis are now deceased; Mahfouz, of course, won the prize in ’88.)

French-Algerian writer Assia Djebar, winner of the prestigious Neustadt, also has been near the top of the committee’s list.

Of course, some Nobel winners (Orhan Pamuk, J.M. Coetzee) seemed crowd-pleasing and predictable, whereas others (Elfriede Jelinek) were quite a surprise. So who knows who it might be. Perhaps peter_d is on to something.

Also: Here’s an online petition to nominate Palestinian writer Munir Mezyed; some of his poems can be read here. (Note from below: Blogger Bint Battuta raises this troubling anecdote about Mezyed. And M. Demetriu (also below) extensively rebuts it.)