Dunya Mikhail: ‘Writing It Twice Is My New Original’

Award-winning Iraqi poet, journalist, and author Dunya Mikhail — whose The Beekeeper, co-translated from the Arabic by Mikhail and Max Weiss, made the 2019 PEN/John Kenneth Galbraith Award for Nonfiction shortlist — has a new poetry collection, In Her Feminine Sign, forthcoming from New Directions this month: 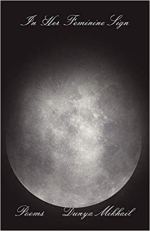 Mikhail, who worked as a translator and journalist for The Baghdad Observer before being forced to flee Iraq, is the author of several collections of poetry, including the award-winning The War Works Hard (2005), translated by Elizabeth Winslow; Diary of a Wave Outside the Sea, co-translated with Elizabeth Winslow, and Iraqi Nights, translated by Kareem James Abu-Zeid. Her latest collection is being published almost simultaneously in Arabic and English: as الغريبةبتائها المربوطة  (June, Dar Al Raffidain) and as In Her Feminine Sign (July 30, New Directions). Both were written by Mikhail.

Where and how did In Her Feminine Sign begin?

Dunya Mikhail: Most of the poems in this collection are written during my experience with my non-fiction book في سوق السبايا (translated as The Beekeeper). I was listening to the stories of women who were stolen by Daesh and escaped. That raised my consciousness and responsibility as a woman. Arabic is a gender-oriented language, you know. The “tied circle with two dots over it” that we call taa-marbuta is a feminine symbol that I used as a theme for this collection.

You say in your author’s note to the English edition: “I didn’t translate them; I only wrote them twice.” Did you work consecutively (all the Arabic poems, then all the English) or did you write them twice however they came to you?

And are the two texts in dialogue? What are they saying to each other?

DM: I wrote each poem first in Arabic and then in English, and then back and forth between the two versions. The reason I didn’t think of it as “translation” is that I allowed myself to be free in the “rewriting” of the poem as if trying to give it two lives that relate to each other but are not exactly a copy of each other. They reflect exile with all of its chances and risks. But I didn’t mean to be like a god creating a bilingual life — I just simply found that my poem had a dialogue (sometimes an argument) with its other self, and I allowed it, feeling good about my “democracy.” The poem was not demanding changes from its companion other; rather, the two versions enriched each other and developed together, like true lovers.

DM: In Arabic I am able to hear the music the words make or not make together. English doesn’t play music for me but it helps me see my text better because it makes me more sensitive towards the Arabic.

Did you consider making a bilingual edition, so that readers can see both sides of the mirror? Or that the poems reflecting themselves?

DM: It might be a good idea but having only one side of the mirror is poetical, like those half heart necklaces in search for the other half.

In the first poem of the English edition, it begins “Everything has gender in Arabic / History is male /Fiction is female. /Dream is male. /Wish is female.” How do you write that poem in Arabic, where it might feel strange to explain the تاء مربوطة, for instance?

DM: When we say “taa marbouta” in Arabic, we understand what it is and there’s no need to describe it in Arabic. If I were to translate that symbol literally into English, the reader would lose its essential meaning as a “feminine” symbol. Therefore, the English title “In her Feminine Sign” is not a literal translation from the Arabic’s “In Her Taa Marbouta.”

Does the نpoem — in Arabic — also have the English letter N? Do you feel that the poems need to reflect each other “accurately” when you remake them? Or does that not matter at all?

DM: Yes, N is the English title too. The poems do reflect each other but not sure about “accurately.” Like other translators, I am “faithful” to the original text when I translate other writers. But when the text is mine, I feel free to make changes especially when a line or a poem comes in English first due to its cultural connotation.

Where did the drawings come from? What relationship do they have to the text?

DM: I drew them recalling the Sumerian time when people inscribed their ideas and feelings on clay tablets. So I tried to express poetic images in the absence of words. They do relate to the small sections I called “tablets” which function as Iraqi haiku.

What makes you choose to begin writing in either Arabic or English? Does the idea come to you in a certain language? Or does each language take you to a different world of its own?

DM: I’ve always struggled with English and I thought I should never write in it. But living here in English, I found some phrases and lines in my poems coming in English in the middle of my Arabic writing, of course due to their cultural connotations. My new poetry collection is the first work I did in both languages in a way that I hesitate to call “translation.” In the beginning, it was an annoying experience, because the poems pulled me right and left (as Arabic and English are written in opposite directions, you know), but when I let them work freely with each other (like a democrat), they actually benefited from each other. Working back and forth between the two versions of a poem, without being necessarily faithful to the first text whichever that is, worked as an additional editing for both. It’s liberating to be the actual writer of the text so you are free to make changes during the translation process. Writing it twice is my new original, I guess.

You recently participated in the 2019 Sydney Writers Festival, and your session on The Beekeeper was sold out. How did you find the Australian audience?

DM: It was probably the largest audience I’ve had for a talk. And yes, they seemed curious to know more. They gave me that impression through their questions and comments. According to the organizers, the festival sold more than $1.2 million in tickets. People attended conversations even in early weekend mornings. In general, I found the Australians I met, whether at the festival or outside, extremely friendly and serious coffee drinkers.

Hend Saeed loves books and has a special interest in Arabic literature. She has published a collection of short stories and is also a translator, book reviewer, and an editor for ArabLit and ArabKidLitNow!

2 thoughts on “Dunya Mikhail: ‘Writing It Twice Is My New Original’”