This lock-in Monday, as part of our ongoing series of stay-at-home literature, a poem by Iraqi-Canadian poet Issa Hassan Al-Yasiri, translated by Iraqi-British poet Ghareeb Iskander:

A Primitive Prayer for Uruk

Translated by Ghareeb Iskander, with thanks to Hassan Abdulrazzak 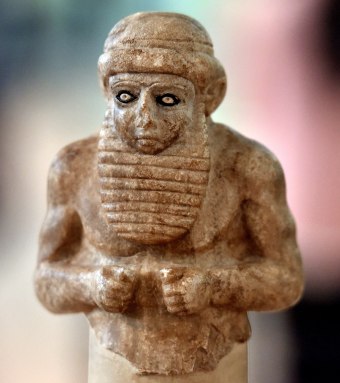 For Uruk, I ask you

Is your first seed

And the grandmother of all your cities.

For your adorable girl

But has not crossed her childhood’s doorstep

I raise my prayer for you.

Give her back her earrings, God

Return to her clay oven the fire

And the rain to her farms

And take away death which harvests her children.

Is the tree that shelters your birds

And the river where the sinner purifies

And the arms in whose embrace the woman feels happiness.

Her minarets glorify Your name

Her churches’ bells ring for your majesty

And her taverns are open all night long

For the witty tramps to have shelter.

For those who are still living in

And for those who left

Save her O blessed, the shelter and the light.

May your name be sanctified O God

Master of the heavens

And the King on earth

The protector of fish in the water

And the baby who swims in his mother’s womb.

To steal some of your fire

She revealed the secret of the Flood

Took Enkidu from his pasture

To give him to death

Not to lose your glory on earth.

Uruk’s people have their sins

And I have my sins and errors

To ask her moon for light

At the same time

And we refused to sit at her body’s table.

How delicious is Ishtar’s body

The kings of Earth

Placed offerings in front of her marble breasts

And her lake fenced with grass

We turned away our faces from her

And she did not capture us.

So why did Uruk become a home for sadness,

Uruk did not say to you:

Let me see you.

What should the mother do

When she sees her children being led to death

Or they leave her quickly

Like a flock of sparrows, whose nests have been ransacked by night cats?

Uruk is the dearest city to your heart

Hold her so that her foundations would not collapse.

I am the farmer who plows Your land

Takes care of your sheep

Listen to this my prayer

Uruk is your honorable city

Lit by the sun during the day

And by moon during the night

It is a home for people friendly as children

It’s about to collapse, so hold it!

Keep away from her

Those who put the lamb to the wolf’s mouth

And the sparrow in the owl’s nest

And those who contaminate the spring water.

I am your innocent, naive and wronged servant

I swear by your majesty

I have followed your commandments

I did not reject any of them

I did not kill a mother’s child

Or take away a brother from a brother.

I did not break a woman’s heart

Nor did I betray a friend

Nor defiled his honor

I never cut a tree

Nor ban a farmer from his farm

On someone’s neck I did not put a yoke

I neither participated in a war

Or destroyed a house

Or dispersed a family

I did not raise my eye to look at my neighbour’s wife.

In my paper ships

I have crossed this marsh

And arrived at the bank in bright clothes

As if I am ready to meet my herd

Or enter to the bedroom of my bride.

I am the one who offers to your starving, a loaf of bread

The only one I possess.

And when I pass the chandlers

I beg them to light your houses

To make them smell nice.

May you listen to your servant, O God

And return Uruk as it was

Return us to Uruk

And the bed of happiness.

Issa Hassan Al-Yasiri was born in southern Iraq and spent his early years as a shepherd tending his family’s cattle. Like hundreds of other Iraqi writers who sought exile, Yasiri ended up as a refugee in Canada, where he has been living since 2001. Yasiri has published more than 10 poetry collections, including Passage to the Cities of Joy (1973), I Call You from Afar (2008), and Peace Be Upon You, O’ Mariam (2012). An edition of his collected poems was published in Beirut in 2017 under the title The Complete Poems of Issa Hassan Al-Yasiri (Beirut: Al-Mu’assasah al Arabiyyah).

Ghareeb Iskander is an Iraqi poet living in London. He published several books, including A Chariot of Illusion (2009); Gilgamesh’s Snake (2012); Translating Sayyab into English (2013); and Gilgamesh’s Snake and Other Poems, a bilingual collection, which won Arkansas University’s Arabic Translation Award for 2015 (2016). He has taken part in many international poetry festivals and was Scottish PEN’s featured writer in 2014.

Other translations in our stay-at-home series:

Bushra Fadil’s ‘Phosphorus at the Bottom of a Well.’ tr. Mustafa Adam

‘A Street in the Pandemic’ & Other Poems by Jawdat Fakhreddine, tr. Huda Fakhreddine

To support the ongoing work of ArabLit and ArabLit Quarterly, consider buying an issue for yourself or a friend, or helping us out by donating through Patreonor PayPal, or, if you have one, by asking your institution to take out a subscription to the magazine.

5 thoughts on “Lock-in Literature: ‘A Primitive Prayer for Uruk’”