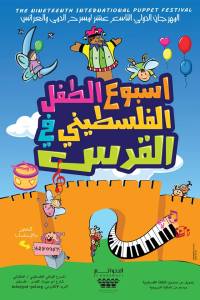 Aharonovitch claims that the reason for shutting down the event, which has been held annually for 18 years, was because it was “under the auspices of or sponsored by the Palestinian Authority (PA).”

If this were true, apparently the children’s theatre festival would be running afoul of an Israeli law apparently passed as part of Oslo.

Theatre director Mohammed Halayiqa told the AFP and Haaretz that the PA had no involvement in the International Puppet Festival, which was funded via a variety of non-governmental sources. Halayiqa further told Haaretz that he’d been shown no evidence supporting the allegations against the festival, which has been in intense preparations for the last four months.

A spokeswoman for the Israeli Public Security Ministry declined to tell Haaretz whether evidence had been presented.

El-Hakawati is a storied theatre: In 1984, they took over the burned-out shell of the Nuzha Cinema in East Jerusalem, which was rebuilt by hand by a core original group.

The founding group had been part of an earlier El Hakawati theater company, formed in the late 1970s. According to Haaretz, “During the 1970s and ’80s, East Jerusalem was still the capital of Palestinian culture for residents of the West Bank and Gaza Strip, when there was freedom of movement between the two territories and Jerusalem.” However, despite encroachments and El Hakawati’s progressive isolation due to Israeli restrictions, they have still “presented a regular schedule of plays, films and concerts.”

The theatre group has been no stranger to shutdowns and censorship; when they toured the US in 1989, for instance, with the acclaimed “The Story of Kufur Shamma,” then-producer of the New York Shakespeare Festival Joseph Papp cancelled their show, telling the NYTimes: “I’ve never presented an Israeli play, and I didn’t want to make a statement at this particular moment by presenting a play dealing with the Arab-Israeli world from a Palestinian point of view.”

The NYT suggested that wasn’t Papp’s real motivation; they also ran a rebuttal by Alisa Solomon.