The Failure of Sansal’s ‘2084’: Its Essential Optimism

Boualem Sansal’s 2084 is undoubtedly a publishing success: people are buying the books and it’s now been placed on eight prize longlists. But is it, essentially, a failure?

A second look at a book that will no doubt soon be coming to English: 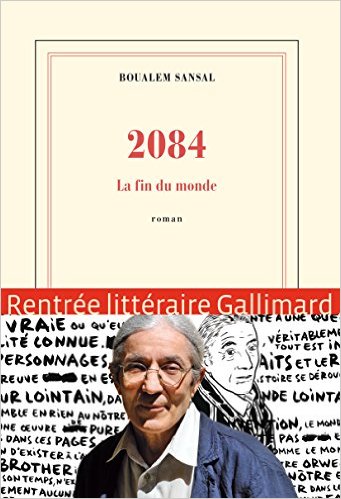 In 2015, the French literary scene has seen two major novels that imagine a future where political Islam is triumphant. The first of these is Michel Houllebecq’s Soumission, in which a Muslim political party, democratically elected, takes power in France. The controversial Houllebecq has surprised many with his relatively benign portrayal of creeping Islamization. Readers were no doubt expecting something more along the lines of the second such novel, the Algerian Aboualem Sansal’s 2084, in which nothing at all is benign.

Set in an unspecified future time, 2084 paints a grim future in which a totalitarian, quasi-religious ideology reigns supreme. The “religion” is a parody of Islam. It centers on a figure named Abi, the “representative,” the deity Yölah, and the sacred book, Gkabul. The faithful are required to pray nine times daily and since orthodoxy is rigidly imposed by a North Korea-style totalitarianism, to submit to indignities such as periodic official interrogations that ensure their conformity and submissiveness. Active participation in public mass executions of deviants and criminals is strongly encouraged. The dystopic, post-apocalyptic land- and cityscape is a perfect setting for a world in which, like Orwell’s 1984, a brutal but omnipotent and omniscient regime controls all thought. Or attempts to do so.

The plot, such as it is, involves a man named Ati, who stumbles on a strange secret in a chance encounter with an archeologist. A recent excavation, the archeologist confides, has had the disturbing effect of casting firm doubt on the regime’s official version of history: the standard account of Abi and Yölah cannot be correct. This amounts, for Ati, to thinking the unthinkable. (Needless to say, the archeologist soon disappears.) The seeds of doubt and curiosity thus fertilized, Ati embarks, without any intent to subvert the regime or the religion, on a quest for the truth. Given the regime’s attitude towards the pursuit of truth and knowledge, it is a quest that seems sure to end badly.

The story is in any case secondary; the narrative is less moving than the ideas at stake. The results of extremism, the horror and, above all, the dehumanization are vividly rendered. Acts of barbarism aside, the narration focuses on the extreme lengths to which the regime will go to suppress independent thought and the way in which this has stripped its citizens of most of their human qualities.

The novel is peppered with amusing and intriguing Islamic references: the salafis are seen in those with “long dark robes that hung down to just 6 fingers above the heel”; a hastily abandoned desert city echoes the “City of Brass” of the Thousand and One Nights, but while that city served as memento mori, here there is a suspicion that the inhabitants have been swiftly removed by the secret police. The attentive reader will note similarities with events in the life of the Prophet Muhammad, with some representatives of the religion resembling the pre-Islamic Meccans of Quraysh. There are also allusions, some subtle, some less so, to Orwell’s 1984, Sansal’s acknowledged inspiration.

As the product of the events of recent decades in Algeria, 2084 is a fitting and salutary cautionary tale, and at a time when there is a tendency to equate all Arabs with excessive religious zeal (has there ever not been such a time?), it is important that secular voices from the region be heard and listened to.

That 2084 falls well short of its model 1984 is perhaps not surprising. What might be unexpected, though, is that the former’s shortcomings are due to its essential optimism. For all the gruesome features of life in Abistan, the narrative consistently assures the reader of the existence, however furtive, of ideas such as freedom and democracy. 2084 is essentially a novel of ideas, and the world of ideas it puts forth is solidly Manichean. There is nothing to argue about here: there is good and there is evil and nobody is going to confuse the two. The omniscient narration, with its occasionally sarcastic asides, is itself a kind of divine presence whose sympathies lie firmly with our own.

Compare this with Orwell’s 1984, which is told from the point of view of the unfortunate protagonist Winston Smith. Through his perspective we feel the suffocation and the terror: it’s a very pessimistic view of politics and society. The didactic nature of 2084 does not permit the same. Furthermore, much of the strength of Orwell’s novel is that it shows how ordinary people can be made to commit reprehensible acts. (For that matter, even Houllebecq’s Soumission shows how people may be swayed by ideas they once found appalling.) Sansal, however, spares us such dilemmas. 2084 gives us hope and a clearly defined picture of right and wrong. The result is the secularist preaching to his choir: I cannot imagine that too many readers of 2084, whether on the left or the right, would object to his moral judgment. They might, though, object to a simplified vision of a tragic situation.

This simplicity is, unfortunately, no doubt partly responsible for the novel’s success so far in France. It may appeal to those sympathetic to the plight of the Algerian people as well as those who fear the spread of Islamic extremism. If the condemnation of Arab regimes and Muslim radicalism is well founded and even well expressed, it is nonetheless the case that 2084 provides a comfortable vantage point for those who wish to gaze briefly at a horrific scenario while confirming their own beliefs in liberty and freedom of thought.

At this point, Sansal’s dark portrait of an Arab-Islamic future has been shortlisted for at least eight French literary prizes. Is it telling that Houllebecq’s Soumission, a deeply unflattering portrait of contemporary France, features on none of those lists?

Bruce Fudge is Professor of Arabic at the University of Geneva.

2 thoughts on “The Failure of Sansal’s ‘2084’: Its Essential Optimism”