A Talk with TA First Translation Prize Shortlistee Elisabeth Jaquette: ‘Outside of a Narrow Norm’

ArabLit founder M Lynx Qualey profiled rising-star-translator and TA First Translation Prize shortlistee Elisabeth Jaquette for The National. This is the longer version of their exchange, and gives Jaquette the floor:

The TA First Translation Prize was funded by Daniel Hahn with prize money If you were going to – like Danny – take a large chunk of cash that had fallen on you, and start a new initiative for translators or translated works, what might it be? 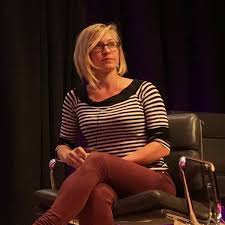 Elisabeth Jaquette: I dream about creating a residency for author-translator-editor teams. Last summer I was in London presenting at the Shubbak Festival, and the day before Rasha Abbas and I presented a bilingual performance of her new work, we stole away in a room in the British Library along with Alice Guthrie (who has translated Rasha’s work and edited two books of mine) to work on the text for an hour. It was a magical experience. I realized that for all the hundreds of hours I’ve corresponded with authors and editors on a text, we’d never done that work in person, much less with all three parties present. There were things that Rasha, Alice, and I realized about the text and how it worked in different languages, solutions we hit on, that only came about because we were in the same room, in that collaborative environment. There are great residencies out there for author-translator teams—BILTC and Art Omi are two—and you’d only enrich the conversation with the editor in the room as well. I think the quality of the work produced would be phenomenal, and it would be an incredible learning and development opportunity for everyone involved. (Of course, if there’s funders out there reading this who are excited by the idea—get in touch!)

Of your training (official and not) as a translator, what aspects do you think mattered most? CASA? Your participation in Cedilla? Your MA? All of the above?

EJ: Translators have many skills in our bag of tricks, as my Cedilla colleague Sean Bye often says, and each of those experiences helped me develop different skills that are essential to the work I’m doing now. It was by living in Egypt for five years that I forged emotional connections to the texts I take on, and through CASA that I improved my Arabic to the level where I can translate. At Columbia, where I did my MA, Susan Bernofsky allowed me into her translation workshop in the MFA Writing Program (even though I wasn’t in the program, something I’m still grateful for!). That workshop, along with her edits and mentorship, completely changed the quality of my translations, teaching me to strive not for the literal but the literary. Finally, being part of Cedilla & Co.—where we share information about publishers’ tastes, help each other sharpen pitches and negotiate contracts—has been instrumental in advancing my industry skills.

Are you translating Basma Abdelaziz’s new novel, which came out at this year’s Cairo International Book Fair? If yes: Why did you choose to do it? Do you feel, when you start on a translation project, that you are also making a commitment to the author?

EJ: A week after The Queue was published in English in the US, Basma told me she had started working on her second novel, and I’ve been eagerly waiting to start translating it since then. I feel incredibly luck to have found a close collaborator in Basma: someone who I admire as a person and a writer. We work well together, and we’re interested in many of the same things: books that ask more questions than they give answers, veiled political references in clever turns of phrase. When I start translating something Basma has written, I know I’ll have deliciously troubling translation problems to work out, and that we’re going to have stimulating conversations about cultural references and meaning in Arabic and English.

I’ve translated thirty-some different authors at this point, so of course couldn’t (nor would I want to!) commit to translating all of them. But there are a few authors whose work really resonates with me, whose career I’m committed to personally and professionally. To me, that means much more than translating words on a page; it means using the connections I have from where I’m situated in the US to bring opportunities their way. On a practical level, that’s acting as agent for their book-length works, finding homes in English publications for their shorter works, connecting them to speaking opportunities in international festivals, facilitating residencies and grants for their own work. With certain authors, Basma and Rania among them, I hope we have a career of collaboration ahead of us.

What other books & authors have you read in the past few years that have really struck you?

What does it change for you to be working at ALTA? What are the advantages to being there (vs. just working as an independent translator)? I guess you can’t really talk about the disadvantages. What role do organizations like ALTA play, and what else would you like it to do in the future?

EJ: I’m very interested in how organizations and institutions can help support translators, translation, and the field as a whole, perhaps because translation is such solitary work and can be quite isolating. I cut my teeth in translation world while living in England in 2014-15, and their ecosystem of organizations that support different aspects of the field, often in collaboration, made a big impression on me. (Here I’m talking about English PEN, Society of Authors, Free Word Centre, BLCT, Writers Centre Norwich, etc). One of my hopes in heading ALTA is that we’ll start seeing US translation organizations collaborating more closely, and thinking together from the perspective of the field as a whole. Along those lines, I’d also like to see more communication between translators and editors, publishers, booksellers, reviewers. Those relationships can be adversarial at times, but at the end of the day we share the same goal: getting great books into the hands of readers! I think we can better support each other towards that if we have a better understanding of priorities and feasibilities, on all sides.

I also think the field of translation has worked out ways to support emerging translators (through mentorship programs, ATLA Fellowships, MFAs) and to recognize excellence at the height of a translators’ career (awards), but I’d like to see more support for mid-career translators. I’m not sure what that would look like, but I’m interested in asking those questions. I would also like to see better support for professional translators—for instance, stronger contract vetting services (something Alex Zucker has pushed for, and that the Authors Guild is working on).

The disadvantage of being at ALTA, of course, is that I don’t have nearly as much time as I’d like for my own translations! I’m not the kind of translator who can put in a couple of hours before or after what’s now my day job. I need a long chunk of time where I can slowly sink into the voice of the text, and begin to hear both the Arabic and the English at the same time.

What role do you think the “TA First Translation Prize” can play in the wide, complicated, and sometimes messy field of translation?

EJ: I just answered the same question for the Center for the Art of Translation blog, so this is a rephrased version:

I feel very lucky that English PEN and Melville House took a chance on Basma and me, a debut author and debut translator pair—especially as The Queue wasn’t just my first book-length translation, it was my first translation of anything! Pitching the book felt like a shot-in-the-dark, and for it to have gotten the recognition and success that it has makes me all the more grateful to be shortlisted for the TA First Translation Prize. That’s is the statement I believe the TA First Translation Prize can make: that there’s really excellent work being produced by recent entrants to the field. I hope that awareness can encourage editors to take a chance on emerging translators, and uplift those who do so.

You said that “I was drawn to working with Mamoun not only for her writing but for who she is as a person: a fearless journalist and activist.” And also: “I believe that providing a platform for Mamoun and authors like her is even more important in a time when the United States is shutting its borders and stoking racist xenophobia. Yet work like hers should not be forced to exist in a space defined primarily by the narrative of security.” How do you navigate between those two interests?

EJ: It’s a tension I find challenging to parse. I do believe that translation can broaden horizons and transcend borders. And particularly at a time when the US is shutting its doors, threatening to build walls, and generally turning its gaze inward, literature in translation can appear as an appealing antidote to our current political moment.

But I also think we lose something when we spend so much time justifying translation, or expecting it to do things to readers instead of just being—wonderful, enjoyable works of literature.

Ashley Levy, co-founder of Transit Books, put this well in a recent interview: “While there’s never been a better time for more people to be reading about political and historical and cultural landscapes outside of their own, to us these books are more than that. They’re these works of great art.”

Translated literature, particularly from non-European countries, is often expected to play a dual role, both literary and ethnographic. But those expectations limit the types of stories that certain languages are permitted to tell, whether they speak directly into or against stereotypes.

I suppose I wish we didn’t expect literature in translation to have a didactic function. That we listen to the stories writers want to tell, and don’t go seeking for what we want to hear from them.

Rania Mamoun, for example, is a fiction writer, journalist, and activist. I want readers to pick up her fiction because it’s great storytelling—not because it can represent her country or play a role in the US’ current political narrative—and turn to her journalism or nonfiction if we’re seeking to learn more about Sudan.

I want us to exist in a world where writers who invite a political reading of their work can do so (as, for example, I think Basma intends with The Queue) but also where we recognize inventive or compelling writing simply for that fact—and not for what it might teach us about a ‘somewhere else.’

EJ: As translators, editors, publishers, we do more than move words around: we create new terrain in our country’s cultural landscape, and it’s important to me that’s with work and authors in which I believe. In my case, those authors have often been women. When you translate a book you choose to live inside its world for the months (or years) it takes to finish. I don’t want to live in a world where women are foils for male characters, constantly sexualized, paper-thin stereotypes, or simply absent. I don’t want to bring more literature like that into our world. I am interested in books that interrogate, frame, or describe the world in ways we haven’t read before, and in books that are enthralling reading experiences. When we talk about creating platforms for writers that have been traditionally marginalized, it’s not just about identity and representation, it’s about making space for kinds of storytelling outside a narrow norm.