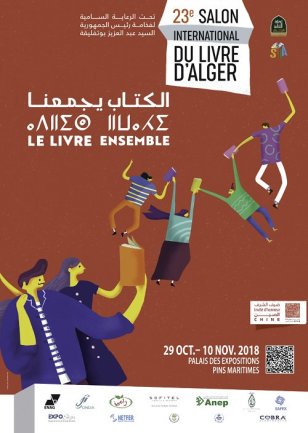 The 23rd edition of the SILA, aka the Algiers International Book Fair, was officially opened with the cutting of a ribbon on October 29. It will run until November 10. This year, China is guest of honor, bringing the eagerly awaited 2012 Nobel Prize for Literature winner, Mo Yan; 40 Chinese publishing houses; 10,000 titles of Chinese literature translated into Arabic and French; and 2,500 titles in the original Mandarin.

Around two million people are anticipated to visit the stalls of 1,015 publishing houses, among which are 276 Algerian ones. Ninety guests will be chairing conferences, we are told, gatherings like the European Union’s 10th Euro-Maghreb Authors Conference, which will focus on “memories” or the now famed Panaf space, organized yearly to discuss the fiction and non-fiction produced by African writers.

For Algerian publishing houses, the SILA is the place to launch new releases. Among the people I follow, Said Khatibi is releasing “حطب سراييفو” (Firewood of Sarajevo), Amel Bouchareb ‘ثابت الظُّلمة’ (Constant Darkness), Mustapha Benfodil ‘Body Writing’, Chawki Amari ‘Balak’, and Waciny Laaredj announced the forthcoming second volume of his epic on the Emir Abdelkader The Book of the Emir.

This yearly international gathering can easily compete with the largest mosque with the tallest minaret project, in scale, scope, and madness. The one bit of fun I wasn’t expecting this year is a whodunit published daily in El Watan newspaper by the wickedly funny novelist Chawki Amari, titled “Murder at Algiers’ Book Fair.” In golden-age fashion, this serial will be running over several days in the paper, I even hope over the whole 10 days, but Amari being a bit of a mad hatter, who knows.

So just for fun, here are the first two installments in English. If you read carefully, Amari will tell you much and always about the real skirmishes that spice up the Algerian lit scene: Sansal’s seemingly constant search for new provocations, the gibberish favoured by certain writers, others’ fondness for freebies, narcissism, Daoud’s now well-established loathing for anyone and possibly anything bearded (except for Father Christmas? I’ve always wondered), Boudjedra’s grumpiness, and the general Roman arena scenes they make for us all while the armed lion we all fear looks on. Inspector Loub is of course a big wink and grin to the incorruptible Inspector Llob, he of the Yasmina Khadra quartet. Well now, will you guess whodunit?

People were gathered outside in a compact crowd, elbowing each other, but politely because this is first and foremost a cultural event. Yes, this is Algiers’ Book Fair, the largest authorized gathering of the year. The International Book Fair of Algiers, or SILA, where nearly two million visitors are awaited, fans of all types of books, religious lit to novels, dictionaries of the female anatomy to the Atlas of things unsaid, from the Devil’s biography to studies on the archaeology of the future.

China is guest of honor this 23rd edition. A fact that appears to not have best pleased Boualem Sansal, disguised as a Trappist monk for the occasion. Between stalls where curious readers move about each other curiously, Sansal informed Kamel Daoud of this, himself shoving a bearded man wheeling a barrow full of books.

The Chinese and Uyghurs Islamists, presently in conflict in the Xinyang region, are not the only ones present. Forty-seven countries are represented through 970 publishing houses, among which 271 are Algerian. Amin Zaoui arrived late and took Yasmina Khadra out for a coffee, then requested a voucher to get a reimbursement, later refused by the Book Fair’s Commissioner, it is said. According to novelist Samir Toumi who arrived in a scooter, his own request to park in front of his publishers’ stall was also refused by the Commissioner. Rachid Boudjedra arrived dressed in a kachabia and greeted no one. At 3 p.m., Lazhari Labter had already begun his conference on Lazhari Labter and it is while the crowd already growing large in its search for the will to live in a book that a woman, 25 years of age and therefore suspect, gave the alert with a piercing cry that brought everyone out of their silent reading.

A man was lying on the floor in his red blood, a blue pen sticking out of his throat. Dead. Was this a traffic accident? A crime? At the book fair? But who? Done? It? Can someone who reads books kill? Can a poet die?  To be continued …

300,000 titles available, 60 books banned, that’s the SILA. This great literary celebration that assembles nearly two million readers every year in Algiers. Except that a murder has just been committed here. A man is lying between bookstalls, dead, a blue pen in his throat. The Commissioner came immediately, though he’s not really a commissioner, then policemen arrived although they were next door, practically “inside the SILA” according to SAS, a novelist born in October who writes about October and pleaded not guilty.

Doors were locked, book signings cancelled, books suspended and journalists were tasked with writing nothing. Sent to investigate, Inspector Loub arrived a short while later and examined the body, a man in his forties, and drew a circle around him with a fluorescent marker given to him by Casbah editions without charge.

Inspector Loub’s suspicions first fell on the authors of the 60 banned books, except that they all had an alibi. But who is the victim? Apparently a simple reader, the man held a plastic bag inside which two novels were found, one by Maïssa Bey, and another by Tchoun Abniz, a Tchetchen novelist, not well known, and who writes about the pain of living on a tennis court without a net.

Maïssa Bey was interrogated but had an alibi. She was writing a novel in her home about how time was better before than in front. Abniz had already passed away at the time of the events, killed by a ping-pong ball. Inspector Loub, who knows all the enmities between authors, turned to face all those present. He first looked at Mo Yan, the 2012 Chinese Nobel Prize for Literature laureate invited to the SILA this year, but China’s ambassador to Algiers came between them. He refused any involvement in this situation, his country being guest of honour. So who’s the murderer? An Algerian writer? But which one? To be continued…