Banipal editor and novelist Samuel Shimon writes — in issue 63 — that he’d proposed, at the beginning of the year, a list of “100 best Arabic novels”: 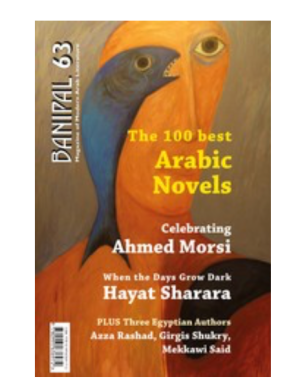 There exists one such list, from the Arab Writers Union (which is 105, rather than 100), but it’s confined to twentieth-century works. Shimon’s list was to be a fresh look and include twenty-first century works.

But, he writes in his introduction, he couldn’t do it. “WHY?” he writes. “Because I found my initial list was full of titles of novels I loved, and therefore it would be Samuel’s list, not the sort of list we wanted for the magazine.”

Thus instead: “we asked 100 Arab authors, critics, academics, and a few translators for nominations to find the 100 best.” If the names of these 100 were listed, I didn’t see them.

The top vote-getter — with 61 nominations — was Tayeb Salih’s Season of Migration to the North. The next was Cairo Trilogy, with 41, while Children of the Alley received 34. The full top ten:

All but the fifth novel, Children of the Alley, is also on the Arab Writers Union list; the AWU list limited authors to one novel each.

Several more Mahfouz novels made Banipal‘s top 100: The Harafish got 20 nominations, The Thief and the Dogs 15; Midaq Alley got 12; Miramar 10; and Adrift on the Nile 9. In total, Shimon writes, Mahfouz received 106 nominations.

In all, Shimon writes, the lists share 44 titles, and the Banipal list includes 21 titles that were published post-2001. They’re also far different lists because Banipal allows for more than one title from the same author.

The first post-2001 title to appear is Ahmed Saadawi’s International Prize for Arabic Fiction-winning Frankenstein in Baghdad, at 15, which has been translated by Jonathan Wright. The first book not available in English translation is Munif’s East of the Mediterranean, which comes in at 17. The first woman novelist to appear in Radwa Ashour at 23, with her Granada Trilogy. Only the first book of the Granada Trilogy has been translated to English, by William Granara.

The other women on the list are Hanan al-Shaykh (The Story of Zahra, 27); Latifa al-Zayyat (The Open Door, 37); Alawiya Sobh (Maryam, Keeper of Stories, 39); Ahlam Mostaghanemi (Memory in the Flesh, 46); Layla Baalbaki (I Live, 55); Hoda Barakat (The Stone of Laughter, 63, and Disciples of Passion, 86); Raja Alem (The Dove’s Necklace, 64); Ghada Samman (Beirut Nightmares, 71); Inaam Kachachi (The American Granddaughter, 72); Huzama Habayeb (Velvet, 84); Sahar Khalifeh (The Door to the Courtyard, 91); and Miral al-Tahawy (The Tent, 99). There were thirteen novels by women on both this and the Arab Writers Union list, although they are not by the same women.

Usefully, the Banipal list is not just a list, but also includes brief introductions to both the works and their authors, as well as some contextualization.

As well as being enjoyable in and of itself — because who doesn’t like a list — there are some Arab Writers Union oversights that this list remedies: Syrian poet and novelist Salim Barakat, for instance, appears with The Sages of Darkness. And brilliant younger writers, such as Rabee Jaber, get to be celebrated.

As with all lists, there are some decisions that feel infelicitous: Khoury’s My Name is Adam appears, which it is not among his strongest novels, although it’s his most recent; Inaam Kachachi’s The American Granddaughter is also not her strongest work, although IPAF-shortlisted; and Abdo Khal’s Throwing Sparks, which won the International Prize for Arabic Fiction in 2010, is a sloppy novel.

Indeed, there was a strong emphasis on IPAF-winning books: Bahaa Taher’s Sunset Oasis, the 2008 winner, doesn’t make the list (although two others by Taher do), but 2009 winner Azazeel is there, as are the 2010 winner, both 2011 co-winners, the 2012 winner, as well as the 2013, 2014, and 2017 winners. The other recent award-winners represented are two who took the Naguib Mahfouz Medal for Literature; both winner the 2017 winner Huzama Habayeb (Velvet) and the 2014 winner Hammour Ziada (The Longing of the Dervish).

Certainly, as with all good “top 100” lists, there’s much fodder for discussion.

Find the complete list of 100 and more by ordering Banipal 63.