Studio Créole: Listening to Fiction in Arabic and English, Simultaneously

Starting tomorrow, Studio Creole will launch itself out on the world. A longer version of the three-way discussion between ArabLit editor M Lynx Qualey, Studio Creole curator Adam Thirlwell, and author Adania Shibli will appear in ArabLit Quarterly. 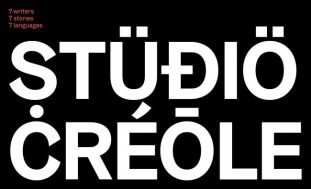 But you can get the idea behind it from a post at LitHub, which opens:

For three nights in Manchester (July 12-14), as many as 300 people will file into a theatre space littered with cables and sound equipment. Seven islands will be placed throughout the audience, hosting seven of the world’s most celebrated authors: Adania Shibli, Alejandro Zambra, Dubravka Ugrešić, Ngũgĩ wa Thiong’o, Patrick Chamoiseau, Sayaka Murata, and Sjón. Each author will be joined by an English-language interpreter.

The project, Studio Créole, was conceived and curated by novelist Adam Thirlwell, who says audience members will each don a pair of bone-conduction headphones so that they can listen to two versions of each story simultaneously. Through headphones that sit on the bone just below the ear, audience members will hear the authors read newly written stories in Arabic, Spanish, Croatian, Kikuyu, French and Antillean Creole, Japanese, and Icelandic. But their ears will be free to listen to an actor, who will voice a near-simultaneous interpretation in English.

“What we’ve found is that, when that happens—and it works—it does something very strange to the brain,” Thirwell said over Skype. “It really does make you believe you understand seven different languages. It almost makes you forget that you’re listening to a translation, so you kind of just think that you’re listening to the Arabic and understanding it. It’s like the opposite of speaking in tongues. It’s like listening in tongues. You think, I can speak Japanese now!”

More about Studio Créole at the Manchester International Festival website.

5 thoughts on “Studio Créole: Listening to Fiction in Arabic and English, Simultaneously”