A poem by Saniya Saleh, whose work featured on yesterday’s “Women Writing in Arabic: 10 Poets to Read Now,” appeared in a previous ArabLit Quarterly, in Marilyn Hacker’s translation. We re-run it now as this year’s Women in Translation Month (#WiTMonth) comes to a close: 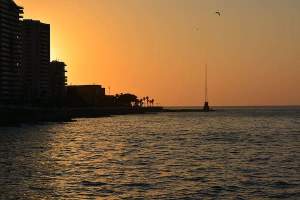 Beirut
I dreamed you were invaded
and awoke to the noise of destruction
The flocks migrated under unknown whips
They writhe and tremble behind the eastern peaks and slopes
until the present, past and future fall on you
leaving your women and men utterly naked.

Ah, love
What was it that woke you, when dawn was a dawn of slaughter
Who set fire to you,
an eternal fire
in my vagrant breast?
When I am here, you are here
When I despair, you goad me toward life and save my soul
from the deluge of darkness.

We were happy
we passed our childhood in womb-houses of clay and thorny burnet.
Happy
we dreamed of love and triumphs, and in every darkness, there were wonders
until  the savage wind came, and lit up the courtyards with a clamour
of departing trains, next year’s funerals, and the herds bleating
as they sank under the thrones into slavery.

Speak, Amyoun
Are you still hidden like the moon on concrete roofs
where we passed the nights of our first transgressions
holding each other, afraid , and the winds plunged
into deep sleep like vultures?
Amyoun,
stop clinging to the earth
for the world abandons the stations of your voyages ,
abandons the places where we shouted for freedom
Stop clinging to dream clouds
for the stars shoot their fire at you
Amyoun, how easy it is to uproot you
and with every sigh, life slips from love’s grip

*
To dream of you is to gain courage to live
My lungs fill up with the air of  provocation
Who would believe that my vagrant soul can transform
those intervals of darkness, doubt and risk, to reach you
Who would believe that my soul could pierce eternity
to make windows of freedom in graves
freedom that’s full of you
In an astounding nocturnal journey
through space resounding with danger
the fleeing soul’s thread emerges, wandering with
its difficult dream, to weave a white love rebellious as the clouds

*
Night is returning
bitter night that awaits  its two fleeing citizens
Night of suffocation, and cutting days
night, its hours destined for me,
your hours of rain, thunder and tempests
How can I set out through such strange times when
my soul was addicted to the taste of evil ?
What wave will break when I tell you tales
of swollen mountains, mad dogs and indignant camels
because they all were on the winning side, and I lost ,
I, the eternal loser

*
Under the moonlight , I loved you
Under the moonlight , I loved God, my mother, and the murmur of water, real water
but my shattered soul, like a field in an earthquake, went thirsty
I know that love comes over us with force, when we are unprepared
The perplexed, the sad, the desperate and the indifferent
all fall prey to love
like the others
even prisoners of war, conscripted for death
prisoners who descended from the Taurus Mountains
were dreaming of love
but they were slaughtered, and abandoned on  the slopes

Ah, love ,
Each time a new era arrives
you take on its colours
In the age of deafening explosions
you developed a taste for explosions ,
and in the era of blood and unidentified corpses
you acquired a taste for blood and corpses
With such disasters, my love sleeps in a pit of memories
With such disasters, the splendid violet spills out under the drunken maps , then stays
to  transform them, sending  its live roots into the ruined earth

Marilyn Hacker is the author of thirteen books of poems, including A Stranger’s Mirror: New and Selected Poems, 1994–2014 (2015) and sixteen books of poetry translations from the French, most recently A Handful of Blue Earth, by Vénus Khoury-Ghata (2017).

By Iman Mersal, on Saleh:

“One of us comes out from the other,” tr. Robin Moger