Sunday Classics: Al Khansa, the ‘Greatest Among Those with Breasts’ (& Testicles, Too)

The final Sunday classic for Women in Translation Month (#WiTMonth) is the undisputed sovereign of the seventh-century elegy:

Al-Khansāʾ — the use-name of Tumāḍir bint ʿAmr ibn al-Ḥārith ibn al-Sharīd (575 – ca. 644CE) — is one of the outsized names of Arabic poetry, best known for the poems she wrote from about 612 onward, lamentations for the deaths of her brothers Muʿāwiyah and Ṣakhr, who apparently died from injuries sustained in battle. She was famed in her lifetime for both her poetry and her self-regard, having rejected the marriage proposal of a powerful man. She believed in the power of her poetry, and is reputed to have appeared at the Souq ’Ukaz in Makkah for the poetry contests.

According to later reports, she converted to Islam when she was in her mid-50s. Her sons fought at the battle of al-Qadisiyyah, at which, legend has it, she was present.

Emily Drumsta, who talked with ArabLit about her course “Women’s Writing in the Arab World,” said, “It’s impossible to talk about elegy without starting with al-Khansa’, and [Geert Jan] Van Gelder’s translation of her most famous poem (for her brother Sakhr) is really quite good. Unfortunately, there aren’t very many poetic translations of other prominent premodern women elegists[.]” 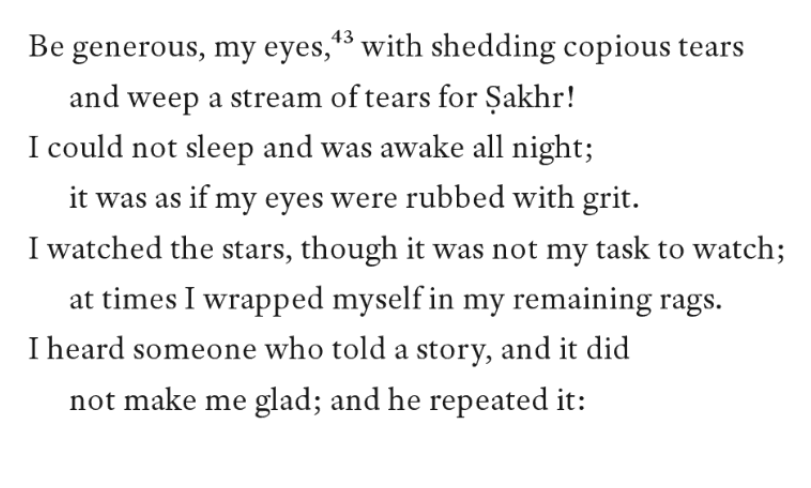 James Montgomery’s writes about how he finally connected with the poems of al-Khansa in the chapbook Loss Sings, reviewed by Sarah Irving for ArabLit, who writes:

Al-Khansāʾ’s poetry is a staple in anthologies of classical Arabic literature, and as such has been exposed to English-language readerships according to changing styles and tastes in poetry. As such, many of the versions available are florid, lachrymose and wordy. Not so for Montgomery’s contributions, which are clean, spare, often simple in the choice of words:

The effect is one laden with impact; the depth of Al-Khansāʾ’s pain and the sense of an unrelenting onward force which strips away her strength and vitality is palpable. There could be little more inexorable the closing line of:

and harvested its malice.

It is no easy thing to translate art that not only spoke in a different language, but also sat in a markedly different artistic, associational, and emotional context. Montgomery speaks beautifully to that challenge in Loss Sings. Yet the thing that translates so easily about al-Khansa is her self-belief. It is quite easy for any of us in 2020 to imagine a woman poet being praised in such a meager way, “Not bad for someone with boobs.” And responding with a sharp-tongued jab at a man’s nether regions.